Elsa the Rescued Kitten Gets a Fairytale Ending 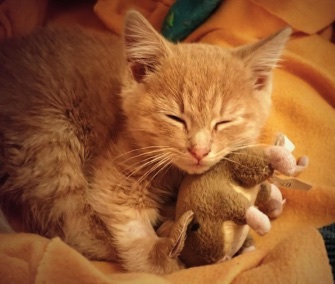 Denver Dumb Friends League / Twitter
After being rescued from the cold in Denver, Elsa the kitten is cozy and warm in her foster's home.

There’s good news for Elsa, the kitten who was found freezing on the streets of Denver last month and rescued by a Good Samaritan who brought her to Denver’s Dumb Friends League. (The group is named after a British organization.) The kitten, who was named for the snow queen in the hit movie “Frozen,” quickly warmed the heart of her foster parent, Jim Slater — and he’s decided to give her a permanent home. "She was by far the sweetest kitten I've ever fostered," said Slater. "She's just amazing." And she couldn’t ask for a better place to live. Slater was chosen as the group’s volunteer of the year for 2014. In the last two years, he’s volunteered for 2,500 hours and fostered more than 70 animals. — Read it at Colorado’s 9News