Fighting Crimes Against Wild Animals: Inside a Wildlife Forensics Lab 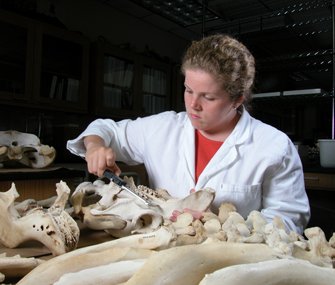 The U.S. Fish & Wildlife Service Forensics Laboratory does many things you may be familiar with from those TV crime-lab shows, such as determining the cause of a death or checking whether the blood on a suspect's clothes is that of the victim. The difference is that the victims in this case are animals, which can make the job more complicated in lots of interesting ways.

The Only Lab of Its Kind

As the only lab in the world dedicated to crimes against wildlife, the facility supports the enforcement of federal wildlife laws. The most familiar of those laws is the Endangered Species Act, which currently protects 1,925 species of plants and animals. Other regulations protect migratory birds and marine mammals, and America's oldest wildlife protection law, the Lacey Act, passed in 1900, regulatesplant and wildlifecommerce between states.

Many of the lab's procedures mimic those performed in cases of crimes against humans. "If we extract from a dead animal that is protected — let's say a wolf — a particular type and model of bullet, and the main subject of the investigation happens to have a weapon that can fire that type and caliber of bullet, then we can seize the weapon, test-fire it, and make a determination of whether the bullet found in the wolf came from the subject's weapon," says Ed Espinoza, the lab's deputy director.

Other cases involve testing stomach contents for poison. "There are cases in which there are huge mortalities of migratory birds and raptors because people put out poison to kill, say, coyotes, and as a consequence kill endangered or protected animals," Espinozasays. Just like in a suspected human poisoning, the lab needs to scientifically determine the exact cause of death.

There's one way human crime labs have it easier: They only have to deal with crimes against one species. When wildlife is involved, sometimes the first question is whether in fact a crime has been committed, since the laws applyonly to certain species. And the identity of the victim maybe not be obvious, because the evidence may be only parts of the animal, which may be altered in various ways: as a leather purse, an article of clothing, an ivory carving or even a traditional medicine.

In those cases, the first line of defense consists of special agents and wildlife inspectors who are trained to identify suspicious items. "They not only need to know the law, they need to be able to do species identification on the spot, or identification of parts of species that may otherwise not resemble the whole animal — to tell ivory from plastic or bone, to identify endangered birds by the pattern in their plumages," Espinozasays.

The lab's job is then to confirm or deny that a protected species is involved, using a range of scientific tools and a staff that includes not only experts in chemistry, pathology and genetics, but also a herpetologist, an ornithologist and a mammalogist.