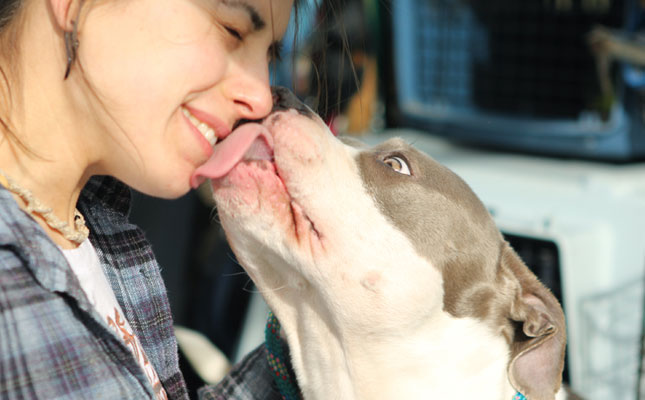 Last summer when a teenage boy and his father were robbed on a bike trail in Portland, Ore., the alleged mugger brought along some muscle — a large Pit Bull — to intimidate the pair into giving up their valuables. But it turns out that the dog, Scooter, was a big softie behind that tough-dog exterior. She'd just been running with the wrong crowd.

Scooter wound up at Multnomah County Animal Services and was there for seven months with no prospects of an adoption when she got a lucky break. One of the workers called Angela Adams, who runs the Born Again Pit Bull Rescue, and that was the beginning of Scooter's new life.

Adams, who has a bachelor’s degree in business management and marketing and works as a caregiver to an 81-year-old veteran, founded the rescue in 2007. “I started it out of my home, privately, independently, totally funded out of my pocket,” Adams says.

She began rescuing Pit Bulls after falling in love with one named Jasmine. “After I read a statistic that for every 1 Pit Bull-type dog that finds a home, 600 die in various facilities in the U.S. — I had to do something,” Adams wrote in her blog. “Something is better than nothing.”

“I love the breed because they are super intelligent, and they are very, very loving,” she says. “They live to make you happy, so it is so easy to train these dogs.”

Last year, she pulled 42 dogs out of Multnomah County Animal Services, and all went through foster homes before going up for adoption. So it made sense that the shelter turned to her to help Scooter.