Home ›
Our Pet Experts ›
Michelle Leifer ›
Lucas and Juno: The Special Relationship Between a Sick 4-Year-Old Boy and His Dog

Lucas and Juno: The Special Relationship Between a Sick 4-Year-Old Boy and His Dog 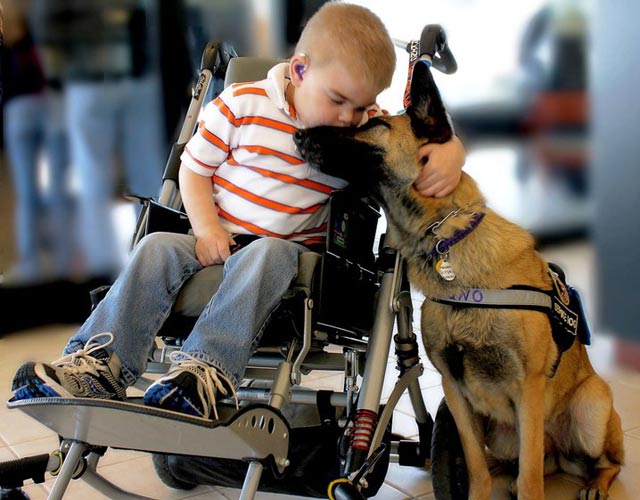 Credit: Courtesy of the Hembree family
Lucas and his best friend, Juno.

As nearly anyone who has adopted a dog or cat from a shelter can attest, there’s something special about a rescued pet; it’s as if the animal senses he’s been given a second chance at life. That’s certainly the case with Juno, a Belgian Malinois who was rescued from a shelter just days before she was to be euthanized. But since coming to live with her family in Alcoa, Tenn., Juno has taken on the role of rescuer to four-year-old Lucas Hembree.

Lucas suffers from Sanfilippo syndrome, an inherited, metabolic disease caused by the absence or malfunctioning of an enzyme needed to break down long sugar molecules. As the disease progresses, children lose the ability to speak, walk and eat. The disease also causes severe neurological damage that leads to aggressive behavior, hyperactivity and seizures. 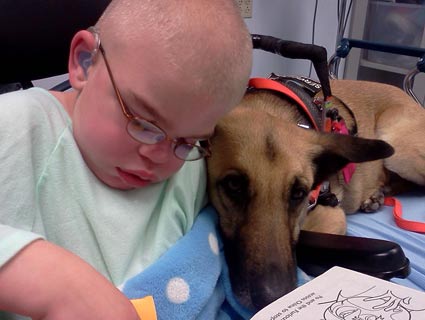 “The most catastrophic thing parents hear when they learn their child has this disease is that there’s no cure or treatment available,” says Lucas’ father, Chester.

Unless that changes, Lucas isn’t expected to live past the age of 15 and may be in a vegetative state by the time he is eight. Realizing that every moment is extra precious, Chester and his wife, Jennifer, want their son to experience as much as he can while he still has the capacity to enjoy it.

So when the disease started to take a toll on Lucas’ joints, Chester looked into getting a service dog to keep Lucas steady when he walked. “I was told that a service dog would cost at least $15,000, and that Lucas wasn’t a good candidate because of his deteriorating abilities and his behavior,” Chester says. “I refused to accept this answer.”

A combination of prayer and persistence led Chester to Juno. “I came across a posting about her on a rescue group’s website,” he says. “I had the feeling in my gut that I had to go see this dog.”

The whole family made the two-hour trip to meet Juno, who was being held at an east Tennessee shelter. “She was emaciated, and was days away from being euthanized,” Chester says. “She had been surrendered to the shelter because her previous owners didn’t understand the Belgian Malinois.” 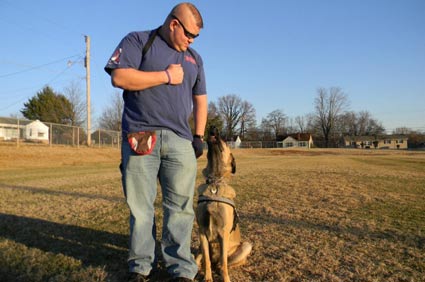 Credit: Courtesy of the Hembree family
Lucas' dad, Chester, knew Juno was a special dog right from the start.

Fortunately, Chester did. He’d gotten to know and love the breed while working as a law enforcement officer years earlier. “I used to help with the training of police K-9s, and our dogs were Belgian Malinoises,” he says. “I loved their desire to work and their ‘never quit’ attitude.” In addition to being a popular choice for police dogs, the breed is often used in combat. In fact, it’s believed that the dog that helped Navy SEALs take down Osama bin Laden was a Belgian Malinois. But while the breed has proven its prowess on patrol and in combat, Chester needed to be sure Juno would be a suitable service dog for his little boy. “I put her on a loose leash and she walked with me and never pulled,” Chester says. “Next came the Lucas test. They took to each other immediately, like kindred spirits.”

The Hembrees brought Juno home and showered her with love and affection. “I wanted to make sure she had plenty of time to adjust to the family before I started the formal training,” Chester says. Yet, from the beginning there seemed to be something instinctive about their relationship. One day, Chester noticed Juno circling Lucas while he was in his wheelchair. “She was whining and nudging him with her nose,” Chester says. “I checked his oxygen levels and they were very low.” After giving him oxygen, Lucas returned to normal and Juno greeted him with licks and affection. 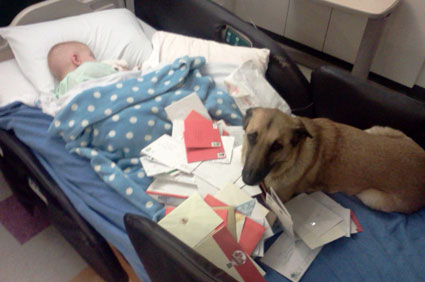 Credit: Courtesy of the Hembree family
Juno watches over Lucas during a recent trip to the hospital. Lucas and Juno received more than 6,000 Christmas cards from well-wishers around the world. This was the first batch.

“That’s when I knew she had the ability to pick up on his neurological changes,” Chester says. “Now she alerts us when Lucas is about to have a seizure or if his oxygen levels drop really low. She has saved him several times." Juno has become a literal shoulder for Lucas to lean on when walking, and a calming influence when he’s agitated. And while Chester makes sure that Juno gets time off, he says that it’s hard to get Juno to leave Lucas’ side. “You don’t see one without the other close by,” he says. “It really feels like it was meant to be.”

To learn more about Lucas you can go to the Facebook page that his dad writes from Lucas' perspective.