The Bulldog isn't just a popular mascot—the breed has steadily made its way into the hearts and homes ofAmerican dog lovers, landing a spot at No. 4 on the American Kennel Club's list of most popular dog breeds in America in 2015. And although that's the highest ranking this breed has ever held, we have a feeling he's not done climbing. After Annabelle the Bulldog won the Non-Sporting Group at Westminster earlier this month, we wouldn't be surprised to see more people looking to bring the breed home.

But, when they do, what should they call their newest family member?

We took a look at more than 200,000 Bulldog names in our database to determine the most popular girl and boy dog names for this lovable breed. 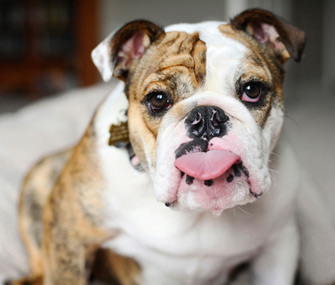 Leesia Teh, Animal Photography
Did your Bulldog's name make our list? Let us know in the comments section below.

Several male Bulldog names not only failed to make the top 10 for the overall puppy population — many of them were outside the top 25, and one didn't even break the top 100! But, with a brief glance at those names (and a peek at the Bulldog's stout and sturdy body type), it's easy to see why these names were so big.

Tank, the top Bulldog name (No. 25 among all male puppies), basically describes the Bulldog's shape, as does Dozer, No. 5 for Bulldogs (No. 83 for all puppies). Winston (No. 3 for Bulldogs, No. 32 for all puppies) pretty clearly refers to the British Bulldog himself, Winston Churchill (and whether you want to ascribe that nickname to his courage and steadfast determination, or to his broad build and jowls is up to you).

Roxy, No. 6 for Bulldogs, was the biggest outsider, having placed at No. 19 with the rest of the puppy names. Chloe, the No. 9 girl Bulldog name, technically falls into this category, as well, but considering it wasjust outside the top 10 for puppies (No. 12), we hardly think it counts as a big jump. But hey, Bulldogs aren't exactly known for their jumping abilities, so maybe that's just as well!