Home ›
Our Pet Experts ›
Linda Lombardi ›
One Woman's Mission: Turning Sloths Into Superstars to Save Their Lives

One Woman's Mission: Turning Sloths Into Superstars to Save Their Lives 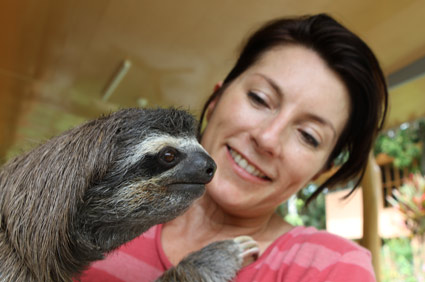 These days, sloths are everywhere. They've gone from an obscure critter with an insulting name to an Internet sensation. And it's thanks largely to author and photographer Lucy Cooke.

Cooke's children's book A Little Book of Sloth is just the latest installment in her one-woman PR campaign for this previously maligned animal. After a video that went viral, her "Too Cute! Baby Sloths" aired on Animal Planet in 2012. And she has just finished shooting an eight-episode series about sloths, set to air in the fall.

Although Cooke has a rather prestigious background in zoology — she studied with the renowned evolutionary biologist Richard Dawkins at the University of Oxford — she didn't leap directly into her current role as global champion for sloths and other underappreciated wildlife. But her more roundabout route was what made her exactly the right woman for the job.

From Frogs to Sloths

After university, Cooke went to work in television comedy, with comedians including Terry Jones of Monty Python fame. Then she started making documentaries. "They were about everything from architecture to history," she says. "Then I did one natural history one, which I hadn't done before, and thought, why aren't I making natural history documentaries? This is what my passion is."

In particular, Cooke's passion is frogs. "I love frogs — they're my favorite animal. They have an amazing story to tell," she says. "They're the original explorers. In their evolution they made the leap from the water to the land. They're incredibly important in the story of this planet."

Meet the sloths from Lucy Cooke on Vimeo.

And, she discovered, they're incredibly threatened. We're in the midst of a global amphibian extinction crisis, with one-third of species worldwide threatened with extinction. So she figured what could be a more interesting and important subject for a documentary? Unfortunately, no one else in the business agreed."Everyone would say, 'Nobody's interested in frogs. Do you have any ideas about pandas or meerkats?'"

Undaunted, Cooke went off on her own expedition for six months, writing a blog and making videos in the hopes of persuading skeptics to back her project. But fortunately for the sloths, she was also looking out for a Plan B, and she found it when she visited the Sloth Sanctuary in Costa Rica, the world's first sloth orphanage.

"They struck me as an incredibly charismatic animal with a very idiosyncratic biology that was really fascinating that hadn't been popularized," she says. "The thing about sloths is that their faces are very human — the forward-facing eyes and this endearing smile that's perpetually on their faces."