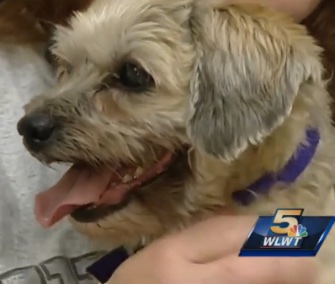 WLWT
Mishka was reunited with her owner this week after being missing for 7 years.

Paula Graff’s dog was 3 years old when she disappeared from her Ohio backyard seven years ago. But she says she always prayed someone would find the dog’s microchip and return her. This week, it finally happened. Graff, who now lives in Tennessee, got a call from the Animal Friends Humane Society in Hamilton, Ohio, saying her dog had been brought in as a stray. Graff was reunited with little Mishka on Tuesday. "She's my heart. She always has been. That's why I never gave up,” Graff said. The dog’s microchip had slipped down to her side from her shoulder blades, but the shelter’s persistent employees were able to find it. Graff said she’s grateful to whoever has cared for her 10-year-old dog in the years since she disappeared. “I can’t even describe how happy I am to see her." — Watch it at Cincinnati’s WLWT