Feb. 13, 2015: We've scoured the Web to find the best and most compelling animal stories, videos and photos. And it's all right here. 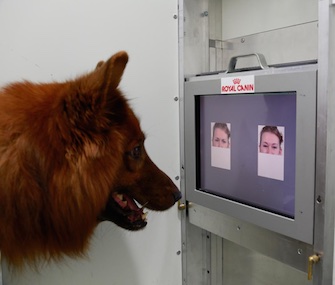 If you think your dog knows how you’re feeling, you might be right. A new study from the University of Veterinary Medicine in Vienna suggests that dogs can distinguish between happy and angry human expressions. The researchers trained 11 dogs to distinguish between the images of the same person making happy and angry expressions, by looking at only the top or bottom half of the person’s face on a computer screen. Then, they showed them different images than those used in training, and the dogs were able to pick the happy or angry face by touching a picture with their noses more often than would be expected just by chance. “Our results suggest that the successful dogs realized that a smiling mouth means the same thing as smiling eyes," and the same applies to angry expressions, said study author Corsin Müller. “We can now confidently conclude that at least somedogscan discriminate human facial expressions.” The study was published in the journal Current Biology. — Read it at Live Science

A new study from the University of Tennessee, Knoxville, finds crocodiles like to play — which means they might be smarter and more social than they’ve gotten credit for in the past. For example, study author Vladimir Dinets observed a pair of adult Cuban crocodiles at Zoo Miami in an unusual and playful courtship ritual where the female would get a few rides around the pool on the back of the larger male. He’s also seen young crocs getting piggyback rides from adults. His research found that crocodiles engage in all three main types of play known in the animal kingdom: locomotor play, play with objects and social play. While their play may help the animals form social connections, the study suggests the immediate reward is pleasure. The study was published the journal Animal Behavior and Cognition. — Read it at Discovery News

Police, dogs and families came together Wednesday to honor Sultan, a German Shepherd mix police dog who was shot and killed by a wanted felon during a standoff in Riverside County last month. The suspect was later killed by police. "I know without a doubt Sultan saved my life and several other officer's lives that day too. He died a hero," said Deputy Mark Wallace, Sultan’s partner, in an emotional eulogy. Wallace shared stories about Sultan, who howled at sirens and didn’t like bicycles. "Sultan was very selective of who'd he let pet him. He wasn't the most social. I found it endearing it was just him and me," Wallace said. — Read it at California’s KESQ 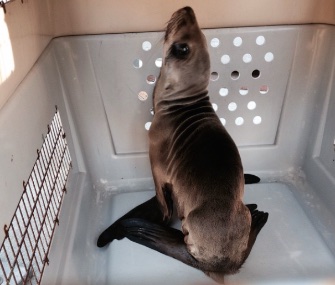 A starving sea lion pup was found more than 1,000 feet from the ocean on Skyline Boulevard in San Francisco Wednesday. He was rescued by National Park Ranger Matt Wallat, who was on his way to work at the Golden Gate National Recreation Area when he saw two motorists protecting the pup on the side of the busy road. Wallat brought the yearling to the Marine Mammal Center in Sausalito, where he named him “Percevero,” a Latin name meaning perseverance. Percevero is one of dozens of sea lion pups who are washing up along the California coast this year. “These pups come in very underweight, and malnourished,” said center spokeswoman Yvette Koth. “Just in the last 10 days, we’ve gotten 100 pups in. Normally during this time of year, we shouldn’t see any sea lion pups at all because they should be nursing in the Channel Islands.” The reason for the strandings is unknown, but researchers think mother sea lions might be going further to find fish to feed on, abandoning their pups for longer periods. — Read it at SFGate

Freestyle skier Gus Kenworthy took to Facebook Wednesday to celebrate his one-year anniversary with Jake, one of the stray puppies he helped rescue from Sochi, Russia, after the 2014 Winter Games. The Olympian melted hearts when he shared a photo of himself holding Jake and his littermates last year, promising to bring them home. Sadly, two of the puppies died, but with the help of Kenworthy’s friend, photographer Robin Macdonald, he was able to save the other two pups and their mom. He posted a photo of himself with Jake last year and one of Jake now. “One year ago today! Crazy how big Jakey has gotten!!!” he wrote in the caption. The pup lives in Vancouver with Macdonald, and his sister, Mishka, lives with Kenworthy in Denver. Their mom lives with Kenworthy’s parents. — See photo at People Pets