June 29, 2015: We've scoured the Web to find the best and most compelling animal stories, videos and photos. And it's all right here. 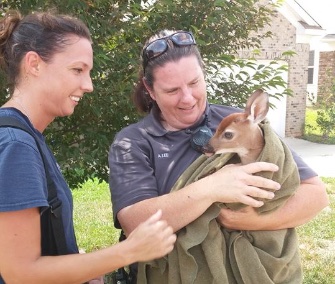 A baby deer is back safely with its mom after being rescued from a 12-foot storm drain in Clayton, North Carolina. A resident who heard the fawn’s cries called 911 for help Friday afternoon. Two firefighters were lowered into the drain — and it didn’t take much for them to convince the deer to come to them. It jumped right into firefighter Holly Holton’s arms. After the deer was pulled to safety, an animal control officer examined it before letting it run to its mom, who was pacing by the nearby woods during the rescue operation. “Outstanding job by all! #alllivesmatter,” the fire department posted on Facebook. — Read at North Carolina’s WNCN

A 10-year-old Pit Bull and Dutch Shepherd mix who was born with a short spine won the World’s Ugliest Dog contest in California over the weekend. Quasi Modo’s owner is a veterinarian who adopted him from an animal shelter. "Luckily, one of the veterinarians there saw the sparkle in my eyes and took me home," reads his biography on the contest’s website. "I have become a great ambassador for teaching people about acceptance and tolerance for things that are different. You should never judge a book by its cover! Just because an animal or person looks different doesn't mean they're any less deserving of love." Despite his deformities, Quasi Modo is still able to run and play, the site says. — Read it at CNN

On Saturday, Ecuador released 201 tortoises from the Chelonoidis hoodensis subspecies on the Galapagos Island of Santa Fe. The island is the former home to the Chelonoidis sp, a similar subspecies of tortoise that went extinct more than 150 years ago after humans took a toll on their ecosystem. The tortoises that were released had been raised in captivity and ranged in age from 4 to 10 years old. About 30 of them were fitted with transmitters that will allow park rangers to track their whereabouts. — Read it from Agence France Presse via Discovery News 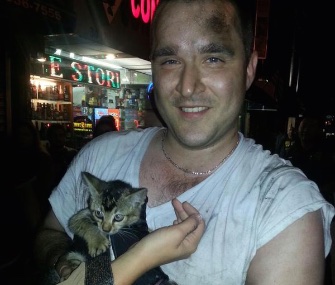 NYPD Officer Sean Ryan was covered in grease but smiling as he posed for a picture with the tiny kitten he saved last week. A passerby had called 911 to report a cat was stuck under the chassis of a tow truck in Queens, New York. The officer crawled under the truck and spent more than an hour trying to coax the kitten to safety. Finally, he was able to pull the kitty out — and sent it home with someone who’d stopped to watch the ordeal. The NYPD’s 114th Precinct shared the photo of Ryan and the kitten on Twitter. — Read it at ABC News

A tiny rockhopper penguin chick is melting the hearts of the staff at Chicago’s Shedd Aquarium. Chick #23 hatched on June 9, and its arrival was announced on Thursday. The baby penguin, whose gender isn’t yet known, weighed about 57 grams when it was born, but is already up to 200 grams. "It is amazing how fast they grow," Christy Sterling, Shedd's assistant supervisor of penguins and sea otters, said. "The chick will grow to adult height within two months!" The baby bird is being hand-fed a liquid mixture of herring, krill and vitamins, and is also being fed in the nest by its parents. Sterling also noted that Chick #23 has quite a fan base among the aquarium’s staff. "The staff are always trying to catch a glimpse of the chick on exhibit," she said. — See photos at the Huffington Post