July 14, 2014: We've scoured the Web to find the best and most compelling animal stories, videos and photos. And it's all right here. 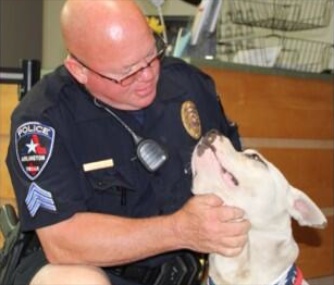 Texas Dog Gets a Second Chance

Late last month, Sgt. Gary Carter responded to concerns about a Pit Bull on the loose in Arlington, Texas. Carter quickly realized that the dog named Jeffrey was friendly, and pictures of Carter with Jeffrey sitting in the officer’s patrol car went viral. On Thursday, Jeffrey ended up back at animal services, and his owner said he no longer wanted the dog — but Carter did. He adopted Jeffrey that morning so he wouldn’t be put down. "This dog keeps crossing my path so it must be meant to be," Carter said. Carter is giving the dog a new home and a new name. He’ll now be called Chance, since he’s getting a second chance in life. — Read it from Arlington Texas Police Department

Scientists say obesity affects about 40 percent of African elephants in captivity, and that could have serious consequences for the species. Almost half of all female African elephants in zoos have abnormal ovarian cycles, which are strongly correlated to a high body mass index, researchers said. An earlier report from the Lincoln Park Zoo found that U.S. zoos need to average about six births a year to maintain a stable elephant population, but the current average is only about half of that. "It may be that zoos will need to rethink how they house and feed elephants to reduce the incidence of overweight," said Daniella Chusyd, a doctoral student at the University of Alabama at Birmingham’s Department of Nutrition Sciences. — Read it at Science Daily


Rare Bird at Risk in India

Conservationists are concerned that the new administration in India is not committed to protecting the country’s environment, and the endangered Narcondam hornbill could be a victim of the government’s focus on national security. There are only an estimated 350 to 400 of the birds left on Narcondam Island, which is the only place where they’re found. The new government has revived plans to build a radar station on the tiny island in response to an alleged Chinese listening post on a nearby island. The previous Indian government had rejected plans for the station largely out of concern for the hornbill, but activists think that might not be enough to stop the plans this time. — Read it at National Geographic 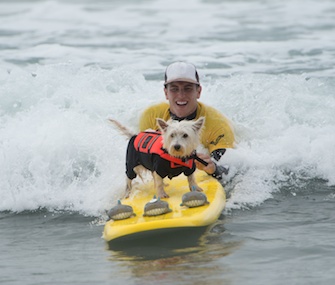 Dogs Take to the Waves

Fifty dogs hit the beach in California Sunday for Unleashed by Petco’s Surf Dog Competition. Thousands of spectators were on hand while judges, including professional surfer Taylor Knox, selected the winning contestants in each category based on five criteria: length of the ride, size of the wave, the dog’s confidence while riding the wave, the dog’s positioning and the dog’s personality. The categories were small dogs, medium dogs, large dogs and tandem riders. This is the ninth year for the competition, which had previously been hosted by Loews.

A 10-week-old gray kitten has been named Nemo after he plummeted from a bridge in Savannah, Georgia, and swam to shore. He had several cuts but no broken bones. Construction workers near the bridge heard a noise Thursday and saw the kitten falling from the bridge. They alerted a nearby Marine Patrol boat, and the crew found the kitten struggling in the mud on the riverbank. Police believe someone threw the kitten off the bridge and are asking the public for tips to help them track down the culprit. Nemo is frightened of people after his ordeal but is recovering at the Savannah animal shelter. Several families have expressed interest in adopting him. — Read it from the AP via ABC News