July 24, 2015: We've scoured the Web to find the best and most compelling animal stories, videos and photos. And it's all right here. 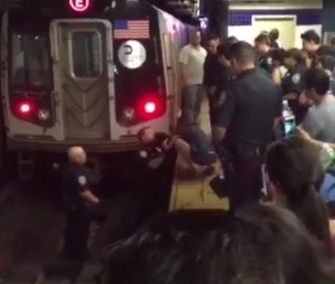 Trains Delayed to Save Cat

A black cat was dramatically rescued from the tracks at a Manhattan subway station at rush hour Wednesday. George’s owner, Mila Rusafova, had him on a leash on the way home from the vet, but he broke free when he was spooked by noise from the train. The scared cat hid in a little spot just inches from the electrified third rail. Rusafova and others on the platform frantically flagged down the operator of an incoming train so he wouldn’t hit George, while her brother went for help. The MTA turned off power to the tracks and two NYPD officers climbed down to rescue George. "He was panting, he was petrified," said Officer Brian Kenny. "I gave him a little scratch on the head. He looked at us. I picked him up, he reached for both of my shoulders like a baby. He almost hugged me." He handed George back to a grateful Rusafova as the other riders on the platform cheered. “Nothing would have happened to George. We were going to make sure of it," Kenny said. — Watch it at AM New York

A team of whale researchers and volunteers worked for eight hours Wednesday to keep an orca alive after she became beached on rocks at low tide in British Columbia, Canada. The group used buckets of water and water-soaked sheets and blankets to keep the stranded whale cool until the tide came in. "She cried often, which tore at our hearts, but as the tide came up there were many cheers as this whale was finally free," said in a Facebook post from the group The Cetacean Lab. Once the whale was able to swim away, she quickly reunited with her pod, which was nearby. — Watch it at Canada’s CBC News

Animal populations on islands tend to develop some interesting traits over time to help them survive in their small living space. Now, researchers from the University of Miami have found that chestnut-bellied monarch birds who live on islands tend to develop darker or black coloration. After visiting 13 islands, they determined that smaller islands had a higher frequency of dark birds. Previous studies have shown that birds react more aggressively to perceived threats to their territory, which could be helpful to their survival on small islands. The study was published in journal The Auk: Ornithological Advances. — Read it at Science Daily 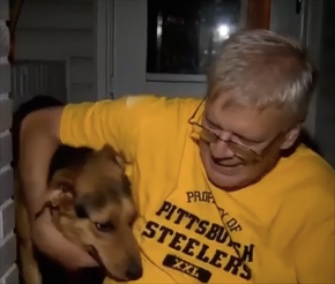 WTAE
Roman was reunited with his owner after neighbors helped rescued him from a cliff behind his backyard.

A 9-month-old German Shepherd and Rottweiler mix was amazingly unscathed after falling over a near-vertical 75-foot cliff behind his owner’s backyard in Pittsburgh, Pennsylvania. A neighbor who climbed down to rescue Roman got stuck himself. Firefighters and medics were preparing to rappel down using ropes and a belay system Thursday night, when another neighbor found an alternative path. He walked back up the path with the dog and the neighbor who’d gone to help him. Roman’s owner was calling his neighbors heroes for helping his dog. — Watch it at Pittsburgh’s WTAE

Canadian mom and photographer Jesse Holland has spent the last 100 days photographing her 2-year-old daughter and her 5-year-old dog — in identical poses and clothes. Her photo series was inspired by a knit owl hat that Ella got as a gift from her grandparents. Holland thought the hat would look funny on Charlie, too, and from there, she started photographing them in mirror images. The funny series is now getting lots of attention online. — See photos from ABC News via Yahoo