Sept. 14, 2012: We've scoured the Web to find the best and most compelling animal stories, videos and photos. And it's all right here. 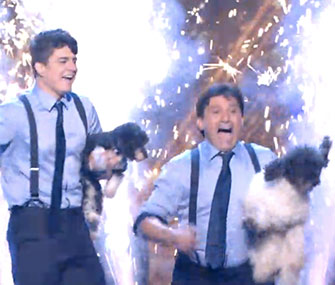 NBC
Nicholas and Richard Olate celebrate their win with two of their dogs.

The amazing acrobatic dog troupe won the grand prize — $1 million, and a chance to headline a Las Vegas show — on the NBC show’s season 7 finale. The crowd went wild on Thursday night when it was revealed that the canine act and their father-and-son trainers, Richard and Nicholas Olate, had defeated comedian Tom Cotter. Judge Sharon Osbourne rushed the stage to congratulate them. "What a phenomenal night," said judge Howard Stern. This is a big year for talented dogs: In May, Britain’s Got Talent gave its top prize to Ashleigh Buter and her dancing dog, Pudsey. — Read it at the San Jose Mercury News, and watch the final eliminations on NBC

They were found in eastern Africa, and they all share one thing in common: large, strangely shaped noses. Until now, the bats were believed to belong to a single species, but researchers from South Africa’s University of Venda studied subtle differences in sonar calls, skull shape and DNA to determine that they were four separate species of horseshoe bats. The findings were just published in the online journal PLOS One. — Read it at Live Science

While on a family trip in Alaska, 16-year-old Kate Curtis caught an 88-inch, 375-pound halibut, which was photographed and then released. This isn’t the teen's first big catch, either. When she was 11, she reeled in a fish as big as she was. “It was really cool touching it,” Curtis said of her latest catch. — Watch it at CNN 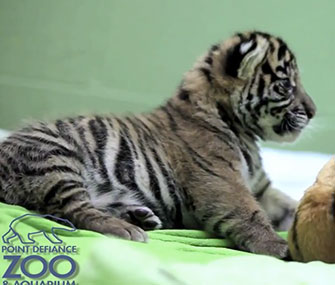 A 3-week-old Sumatran tiger cub at the Point Defiance Zoo in Tacoma, Wash., made his public debut on Thursday. The hand-reared cub, whose species is critically endangered, now weighs almost 9 pounds. “He has his own personality — he’s definitely getting a little sassy,” said one of his keepers of the squealing tiger. “At this point, our goal is just to continue to help him grow into a nice, healthy cub.” The zoo is also asking for help in naming the cutie: Voters can select their top pick from six names — Dumai, Moro, Rokan, Satu, Toba or Tunggal — via an online survey. — Watch the video on YouTube, and see the photos from The News Tribune

Plus: Olympic medalists Justin Gatlin and Carmelita Jeter met their namesakes — two cheetah cubs — at the National Zoo in Washington, D.C., on Thursday. The speed cheetahs were named after the fastest American male and female runners to compete at the London Olympic Games. The cubs showed little interest in the runners' medals, but they received nicknames from Gatlin and Jeter: Gat the Cat and Lita the Cheetah. — Read it at the National Zoo

Maybe Bob-bob wanted a chance to chase Mickey Mouse. The 14-month-old black cat shocked his owner, Ethel Maze, when she opened her suitcase after checking into an Orlando, Fla., hotel for a Disney World vacation. The cat had apparently climbed inside while Maze was packing, made it through airport screening undetected and was loaded onto the plane for the 10-hour flight from Ohio. When Bob-bob was finally freed, "he hid for about seven hours in our hotel room and only in the middle of the night came out and started licking us and purring," said Maze. — Read it at ABC News via Yahoo