Nov. 15, 2016: We've scoured the Web to find the best and most compelling animal stories, videos and photos. And it's all right here. 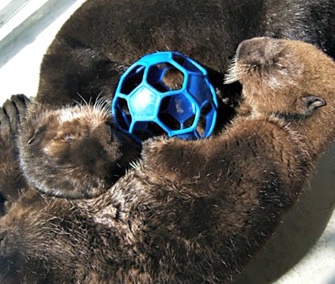 Two sea otters who were found alone as infants in freezing Alaskan waters now have a permanent home at the Vancouver Aquarium in Canada. The pups were just a few weeks old when they were rescued by the Alaska SeaLife Center. They were deemed non-releasable by U.S. Fish and Wildlife Services because they never learned basic survival skills from their mom. The aquarium is asking the public to weigh in on the pups’ names. The choices for the male are Mak, Fritz or Paxson, all references to areas in Alaska. The choices for the female pup are Kalluk, which means thunder; Tutka, the name of a bay in Alaska; or Kunik, meaning kiss. Voting ends on Wednesday. — See photos at Zooborns

A drenched black kitten was saved from a tight spot in Aurora, Colorado, on Friday night. A Good Samaritan arrived at an Aurora Fire Station Friday night to ask for help rescuing a kitten who was stuck about 8 feet down a slippery PVC pipe. The firefighters worked with animal control and the water department to free the kitten. They used towels to make a rope to lower down into the pipe. The kitten used its tiny claws to grip the towel and so it could be pulled out. In a video of the incident, the kitten can be heard crying for help from deep underground. — Watch it at Colorado’s 9News

Around the globe in New Zealand, there was a much different kind of rescue on Tuesday. A video that went viral shows three cows on a tiny patch of land that had become an island when an earthquake struck, leaving them stranded. The 7.8- magnitude quake had led to landslides all around them. The farmer who owned the land, which had been mostly flat before the quake, was able to dig a track to his cows so he could lead them back to safety. — Read it at CBS News 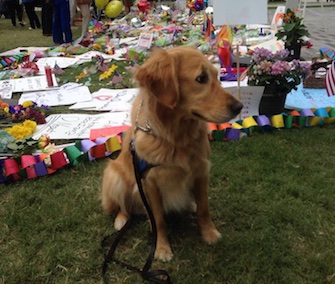 Ruthie Comfort Dog / Facebook
Ruthie, a K9 Comfort Dog, has been named the ASPCA's Dog of the Year for 2016. She's pictured on a visit to Orlando.

Comfort Dog Is Dog of the Year

Ruthie, a Golden Retriever who’s one of the Lutheran Church Charities’ K9 Comfort Dogs, is headed to New York City today. This time, instead of traveling to help others, she’ll be recognized for her hard work. Ruthie has helped victims cope after many devastating events around the country, including the Orlando nightclub shooting and the Boston Marathon bombing and the police officer shootings in Dallas. But her biggest contribution may have been the six weeks she spent in Newtown, Connecticut, following the December 2012 shootings at Sandy Hook Elementary School. On Thursday, the family of an animal-loving young victim of that shooting, Catherine Violet Hubbard, will present Ruthie and her handlers with the ASPCA’s Dog of the Year Award at the annual Humane Awards Luncheon. — Read it at Today

After recovering at a veterinary hospital hours from his Canada home for a month, Bruno was thrilled to be released last week. The chocolate Labrador Retriever was found starving and trapped in an abandoned well near his home on Oct. 14, 27 days after he disappeared. The 7-year-old Lab still has some weight to gain and rehab to do, but he’s expected to make a full recovery, said his owner, John Billesberger. “It's remarkable seeing him here, just so happy and his tail is wagging,” said Billesberger. “He's got his personality back again.” — Read it at the Guelph Mercury Tribune