March 1, 2017: We've scoured the Web to find the best and most compelling animal stories, videos and photos. And it's all right here. 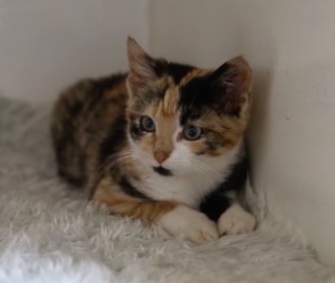 Stuff
A 3-month-old kitten was named Maui after stowing away on an oil rig.

Kitten Gets Helicoptered Off Rig

A 3-month-old kitten who was found on an oil rig about 30 miles off the coast of New Zealand was spoiled by the crew before being flown back to shore on a helicopter. It’s believed that the kitten, who the team named Maui after the name of the platform, stowed away in a shipping container that was delivered to the rig. The workers gave her milk and sardines — and lots of love. But animals aren’t allowed on the platform, so a helicopter was arranged to pick her up and bring her to a veterinary clinic. As soon as the vet determines she’s ready, Maui has a home waiting with one of the oil rig workers and his wife. — Read it at New Zealand’s Stuff

It’s been more than two weeks since the Animal Adventure Park in New York began a live stream of its 15-year-old giraffe, April, in the hopes of airing the impending birth of her calf. But, alas, there’s still no calf. Tens of thousands of viewers have been waiting for the big arrival, and they’re getting impatient. So April, who’s been pregnant for 15 months, had a word with them via a “first-person” essay published by Today.com on Tuesday. “Newsflash: Staring at me and demanding “Where’s that baby already??” is NOT helping,” April wrote. — Read it at Live Science

An otter pup who was found alone on the side of a U.K. river after a storm and “calling for her mum” was taken in by an RSPCA cattery. The 6-week-old baby is being fed formula through a syringe five times a day. Rescuers are being careful not to interact with the pup too much, so she can be released back into the wild once she’s ready to live on her own, in about 12 months. They’ve named the baby Daffi after the daffodils starting to bloom in the area where she was found. “Daffi is very sweet,” said Lee Stewart, a manager at the shelter. “It is very cute watching her move her paws while she is eating.” — Watch it at Inside Edition 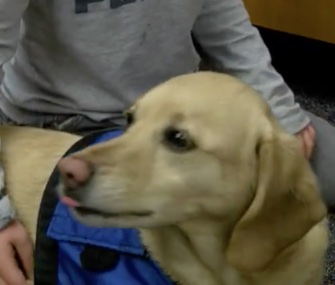 Victor is one of a growing number of 4-legged school staff members. The 7-year-old Labrador Retriever mix, who’s a therapy dog, has been working with school counselor Marcella Holmes at Cumberland Elementary in West Lafayette, Indiana, this year. Any student is welcome to stop by Holmes’ office to cuddle with Victor. “If a child is angry, sad, upset in any way — he’s comforting,” Holmes said. “He’s nonjudgmental. He loves them without any kind of stipulation.” Second grader Owen Beaver said Victor often helps him with his emotions. “He’s helped me with my anger, my frustration,” Beaver said. “Pretty much any feeling, he’s helped me get through it.” — Watch it at Indiana’s WLFI

In an effort to break a world record, 951 slobbery English Bulldogs paraded through Mexico City over the weekend. On leashes and in wagons, the panting pups turned out in droves. Caring owners cooled their pets with water and held umbrellas over them to protect them from the sun. The event’s organizer said this is the first time there’s been such a big gathering of the breed, and data from the event will be sent to Guinness World Records to go for an official title. — Watch it at Fox 5 Atlanta