Oct. 8, 2013: We've scoured the Web to find the best and most compelling animal stories, videos and photos. And it's all right here. 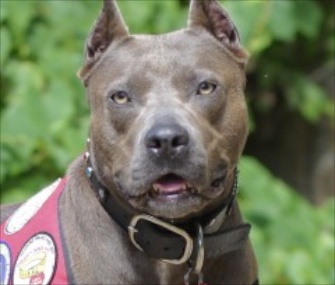 The American Humane Association has given Elle, a 5-year-old Pit Bull, its American Hero Dog award for 2013. The therapy dog from North Carolina not only helps kids feel more comfortable with her “Tail Wagging Tales” program, but she also educates kids about dog safety. Elle helps children get over their fear of dogs with her happy demeanor, and because she’s a Pit Bull, she teaches them about overcoming prejudices and stereotypes against dogs like herself, who are often misunderstood. “As an organization that for years has fought breed-specific legislation (BSL), we are also pleased to honor a breed that has been often been unjustly maligned,” said Dr. Robin Ganzert, the American Humane Association’s president and CEO. “We hope that Elle’s story will help to underscore the many tremendously positive qualities of this breed.” Elle received her honor on Sunday at a star-studded awards show that included presenters such as Betty White and Naomi Judd. The show will air on the Hallmark Channel on Oct. 30. — Read it at Today

Each year, the Chincoteague Volunteer Fire Company rounds up the wild ponies on Virginia’s Assateague Island in an event that’s become a big tourist draw. The fire company manages the herd of about 130 ponies who live on a national wildlife refuge on the island, but because the refuge has been closed due to the government shutdown, the roundup has been canceled. “They're a national treasure, and now, just like the seashore, they're being blocked off to the public,” said the fire company’s incoming president, Denise Bowden. While the company uses the roundup to give each pony a medical checkup before the onset of winter, they will still be able to access the island if a pony needed medical attention. — Read it at NBC Washington

They’re not an endangered species, and they don’t feature particularly beautiful plumage. And, they can be pests, swiping dog food and squawking loudly in the early morning hours. But the Hadeda Ibis has found a spot in popular culture in South Africa, with lodges and restaurants carrying its name and local musicians producing a song about the bird, “Harry and the hungry Hadeda.” The bird’s population has taken off in the past couple of decades with more irrigation in golf courses and other green spaces in Johannesburg, Cape Town and some other cities. — Read it from AP via Yahoo 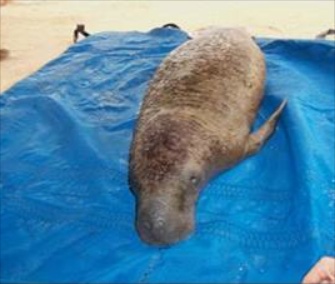 After receiving a report of a distressed, orphaned manatee calf, Florida Fish and Wildlife Conservation Commission officers were dispatched to search for the animal. The calf was found near a sea wall by a hotel on Key Largo. Officer Doug Krieger watched to see if the mom would return while the manatee rescue team was mobilized. A patrol vessel was used to coral the manatee into shallow waters, where officers jumped into the water to help biologists try to wrangle it. The group was finally able to remove the manatee from the water on a stretcher, and it was transported to the Miami Seaquarium. When the calf is healthy and ready to live on its own, it will be returned to the wild. — Read it from the Florida Fish and Wildlife Commission via Facebook

Thumper was one of nine abandoned kittens to be saved by PACT (People and Cats Together) from a yard in California. His rescuers quickly realized that he couldn’t walk or stand because his hind legs weren’t strong enough to support him. A veterinarian diagnosed Thumper with a rare neurological disorder, and said it wasn’t clear that he would ever walk. That’s when PACT came up with the idea to have a special walker made for Thumper that would help strengthen his legs, and it worked. After two weeks of using the walker, he was off and running without it, and his rescuers say you’d never know he’d ever had trouble with his legs. Now, the group is looking for a home where this special kitten can spend his days running and playing. — Read it at the Huffington Post