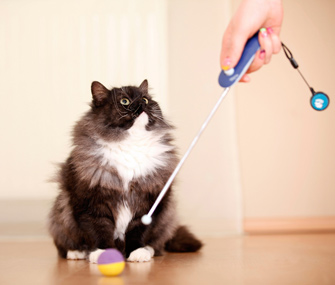 Alamy
Target training can be used to teach your cat to come when called, lure him off the sofa or jump through a hoop.

I recently spent some time working with Vetstreet editor Kristen Seymour, her husband Jared and their 3-year-old rescue cat, Trixie. Trixie was nervous around Jared and didn't want anything to do with him, which made life hard for their little family. After talking with Kristen about their situation, I suggested that Trixie might benefit from target training,which is teaching a cat to touch a certain part of herself to a person's hand or another object or area.

I know what you're thinking: Cats can't be trained! Training is for dogs! Cats do their own thing, their own way. It's the cat's world, and we're just lucky he lets us live in it.

I understand why cat owners feel this way, but I politely disagree. Cats can be trained — in fact, there are some tremendous benefits to training your cat. Training can help improve problem behaviors and allay fears, and it gives cats and their owners a constructive way to interact. Target trainingcan be a particularly useful approach for catsof all types and personalities.

Target training can do more than just teach your cat to do clever tricks; it can change the way he relates to people. Take the case of Joey, a beautiful white cat with dazzling blue eyes.

Joey would lash out when he was moved or handled in a way he disliked. His behavior was putting a strain on his relationship with his human family. Joey’s owner arrived for our consultation with a pair of oversize leather work gloves that she put on when it was time to get him back into his carrier. Putting him into the carrier in the first place, she said, was like trying to muscle a bobcat into a cage.

After asking about Joey’s history and watching him interact with his owner, it was clear to me that much of his aggression stemmed from fear. In particular, Joey was afraid of the unpredictable motions of the people around him, especially hands reaching for him.

To help manage his fear, I recommended that Joey learn to touch a target with his nose.

Learning to target changed Joey’s behavior dramatically. For instance, rather than being forced into his a carrier, Joey learned to willingly follow a target into and out of the carrier. We also taught him to jump on and off of things, such as chairs and laps, which minimized the stress of being picked up and moved around. Finally, as the training progressed, human hands stopped being frightening to Joey; instead, he learned to see them as an opportunity for reward, which led to a change in the way he greeted and interacted with people.