The Life of a Cricket Farmer 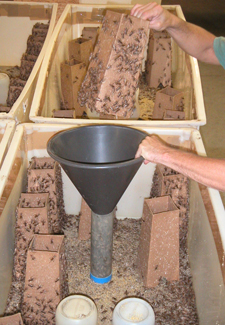 If you have a frog or a lizard, you've probably bought live crickets for it to eat. But did you ever think about the story behind them? It turns out to be more dramatic than you'd expect. In 2009, one of the largest companies, Ghann's Cricket Farm, was producing 200 million crickets a year and employing almost 50 people. After being in business for more than 50 years, they pretty much had it down to a science. What could go wrong? But then they — and the rest of the industry — were nearly wiped out by a virus.

Clay Ghann's father loved to fish. So when he wanted to start his own business in 1952, he had the idea to sell crickets as bait. He designed a wooden box specially for shops to store them in, and he drove around the eastern half of the country, stopping in small towns and looking up the local bait shop.

Ghann didn't expect to follow in his father's footsteps. He helped out as a kid, but, he says,"I saw how hard Daddy worked and said, 'I don't want to work that hard.'"

When he changed his mind and bought the company in 1987, it wasn't because he had a big inspiration to expand into the pet industry. "The pet customers found us," he says — and, at first, he actually turned them away.

"We had one product — a box of adult crickets, 1,000 per box," he says. "That's what we sold, period, nothing else." So when he started to get phone calls from people who wanted only 500 or who were looking for crickets only half-grown, he gave them the phone number of a buddy who was dabbling in crickets for the pet industry.

"I still did not think it was worthwhile. I'd hang up the phone laughing, thinking I was pestering him," he says. "Then I realized I was giving a lot of people Jack Armstrong's phone number."

Ghann decided to get into the pet business, and in just five years, sales had doubled. "It took off from there," he says, till their business was 99 percent pet feeding instead of bait.