The Secret Sex Lives of Animals 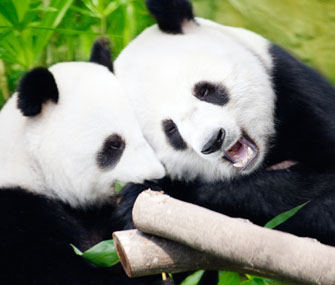 We all love animal babies, but we bet you probably have no idea what some animals have to go through just to perpetuate the species. From reptiles who never have sex to lions who get frisky 100 times in a day, here are some curious ways that fellow creatures procreate.

Too Much of a Good Thing

Humans tend to think that we're the only species that has sex for fun, but some animals do it with way more enthusiasm than seems necessary just to get pregnant.

Take female lions, who are in heat for four days — and mate every 15 minutes all day and night during that time period. That adds up to about 100 times per day, and 1,500 times for each litter that they produce. Meanwhile, for every infant that female chimps give birth to, they mate an average of 138 times, with 13 different males.

Ever wonder where that popular phrase, "the birds and the bees," came from? Well, consider the way some birds go at it: Kestrels and oystercatchers do it 700 times per clutch of eggs. For more restrained birds, like tree swallows, 50 to 70 times will do.

Instead of doing it repeatedly, some animals really make it last. The male Panamanian golden frog gets on the female's back and clasps her in a posture called amplexus, hanging on until she lays her eggs — for a couple of months! Since it's hard to catch live insect prey in that position, the males come close to starving.

Then there's the antechinus, an Australian marsupial that looks like a mouse. All the females come into heat at the same time, so the males go into a frenzy, fighting to do it with every girl in sight. They spend up to 12 hours at a time mating, and at the end of the two-week breeding season, the males are so exhausted that they all drop dead. And they don't all get to leave behind offspring, either: Only the strongest males actually fertilize a female's eggs.

Not all animals have such an active sex life — for some critters, it's a truly rare activity.

Female pandas, for example, are only in the mood once a year, for a small window of just 36 hours. Since they're solitary animals, it's not that easy for a male to run into a female at exactly the right time to make a baby panda, giving new meaning to the term "get lucky."

There are even creatures who get pregnant without doing it at all. Parthenogenesis (virgin birth) occurs among plenty of simpler insects and reptiles, such as some species of whiptail lizards. Others will do it as a last resort when they can't find a mate — like a Komodo dragon who surprised keepers at a British zoo in 2010 by producing a clutch of fertile eggs on her own.