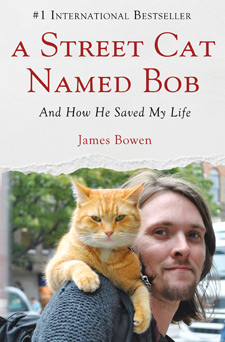 Street and shelter cats have the potential to be good, even phenomenal, pets. When James Bowen, a street musician in recovery from drug addiction, met the scrappy young street cat he eventually dubbed Bob, neither would have guessed just how extraordinary Bob’s effect on Bowen would be, and how their partnership would extend to so many aspects of their lives. Already an international best-seller, Bowen’s book about their lives together,A Street Cat Named Bob: And How He Saved My Life (Thomas Dunne Books), is now available in the U.S.

In 2007, when Bowen found the injured ginger cat in a hallway of his North London apartment building, Bowen was literally singing for his supper. The busker spent his last money for the feline’s meals and the antibiotics he needed to heal a puncture wound. Once Bob was well enough, Bowen set out to release Bob back to the street life he seemed to prefer — the free-spirited cat refused to use a litterbox and insisted on making the trip down the five-floor walk-up to go outside when he needed to do his business. Bowen tried leaving Bob outside the building when he left with his guitar to earn their keep. Instead of returning to his life as a street cat, Bob followed Bowen a little farther each day. As his strength returned, and as Bowen gradually accepted that Bob chose to live with him, Bob began accompanying Bowen all the way into Central London to play songs for tips — and on the days Bob decided to go, Bowen’s take often tripled.

A childhood moving around a lot with his divorced mother made it difficult for Bowen to put down roots and form lasting relationships — until he met Bob, that is. “There was a lot of darkness in my early life, and it was very hard to examine that when I was writing the book,” says Bowen. “It was cathartic in many ways, but it was also very tough.”

In A Street Cat Named Bob, Bowen credits the cat’s companionship with helping him reopen communication with his estranged family, spruce up his apartment, and get completely off the methadone program he had been on once he kicked his heroin addiction. Bob stayed by his detoxing side as Bowen began the process to get completely clean. In one chapter, Bowen describes getting up from bed one night to use the bathroom only to find Bob using the toilet. The pair even became Internet celebrities when people posted photos and videos of the street musician with the cat who likes to travel perched on Bowen’s shoulders.

Bowen recently talked with Vetstreet about their story, the writing process and how their lives have changed since the book came out.

Q. Did Bob really use the toilet without any training or prompting from you?

A. He really did. I haven’t caught him doing it since the scene I describe in the book. But there have been some telltale signs that have convinced me he’s been in there. He’s obviously got more secretive about it.

Q. What do you think it is about your story that so many people like?

A. I think people have identified with us. I think they have looked at us and thought, "There but the for the grace of God go I." We all have troubles in our lives, and it’s so easy for people to fall through the cracks of society and end up on the scrap heap, like I did. I think they have also appreciated the fact that ours is a story of redemption. I’m by no means the finished article, but I’m now clean of drugs and living a much more stable and happier life. I think that appeals to people. I think it gives them hope. I also think people just love Bob; he’s such a personality.