The Surprising Challenges — and Dangers — of Being a Wild Animal Matchmaker 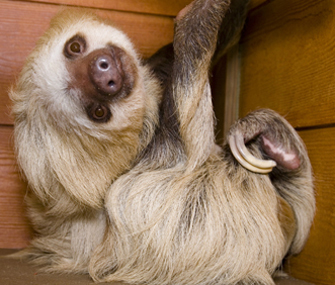 A couple of famous pandas have been in the news recently over some troubles the two are having in the baby department.

In May, it was reported that the National Zoo had chosen to try artificial insemination with its popular female panda, Mei Xiang, who hasn't given birth to a cub since 2005. Just a few weeks later, there was even talk of possibly finding her a replacement mate!

Of course, it's a little hard for a zoo panda to get out and meet someone new. Plus, they can't just date whoever they think is cute.

When it comes to animal mating, zoos employ professional matchmakers who painstakingly organize breeding for many other zoo animals. They're called studbook keepers — and Vetstreet decided to chat with three of them to find out what it's really like to play critter matchmaker.

Animal keeper Lynn Yakubinis at Zoo Atlanta is the keeper of studbooks for two species of two-toed sloths, which have one problem in common with pandas: It's hard to decipher the sex of a sloth just by looking at it.

Yakubinis can make a match that looks great on paper — but when the animal arrives at its new zoo home, it sometimes turns out that "he" is really a "she."

But that isn't the only complication in connecting the right sloths. When dealing with two-toed sloths, there are two different species that look almost the same. And only a DNA test can tell for sure. "I've had to switch animals back and forth because they were in the wrong studbook!" Yakubinis says.

And even if all the animals are categorized correctly, Yakubinis needs patience to see results — after all, they're sloths.

The gestation time for Hoffman's sloths is 365 days, for example, so once you factor in moving the animals to their new habitat and then letting them get acquainted before mating, this is what Yakubinis considers a lightning-fast success story: "I sent one to Lincoln Park Zoo, and within two years, they had a baby."

There's suspense, too, because these animals share something else with those higher-profile pandas: It's hard to tell that sloths are pregnant, so you don't know for sure until the baby pops out. And Yakubinis might not even get to see this happen where she works because the male who's genetically best suited for the female at her zoo is also a good match for females living at other zoos.

"I have to do what's best for the population, not just for our zoo," she says. "It's like a big puzzle, and I have to do best by all the sloths, not just the ones I have."