Home ›
Our Pet Experts ›
Caroline Golon ›
The Things We Do for Love: "Our Time and Money Go to Our Puggles"

The Things We Do for Love: "Our Time and Money Go to Our Puggles" 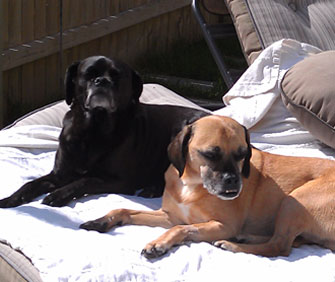 Neal and Cristi Glazebrook of Waterford, Mich., are typical doting pet parents whose lives revolve around their two Puggles, Milo and Monte. But the Glazebrooks have unique challenges with Monte’s health and have spent more than $20,000 and countless hours diagnosing and managing their dog’s medical problems.

The Glazebrooks purchased Milo from a breeder and, six months later, adopted Monte from a rescue. From the start, Monte had issues.

Monte seemed to be accident prone. Prior to his rescue, a car had hit him. After the Glazebrooks adopted him, he tore his toenail so severely that it came off and he had to wear a cast as it healed. Next, Monte got into a tussle with the dog next door — and required 30 stitches. His vet visits (and bills) mounted.

Monte developed skin conditions and major personality changes. He went from being an active dog to one who rarely got up from the floor. He began to have tremors. Alarmed, the Glazebrooks rushed him to the veterinarian. After extensive testing and visits to neurologists and specialists, nearly a month later, the veterinarians diagnosed Monte with a fairly common problem: hypothyroidism.

Once Monte was on medication for his thyroid problem, he began to slowly improve. The Glazebrooks were happy to see Monte acting more like his old self.

A few months later, the couple was dealt another blow. During a walk one day, Monte started acting strange. Neal could tell something had changed with his little dog. Based on his behavior, Neal suspected Monte was having trouble seeing. Later the vet confirmed that Monte had, in fact, gone completely blind. Again, Neal and Christi consulted specialists and spent thousands of dollars to eventually discover that Monte had SARDS — sudden acute retinal degenerative syndrome, a permanent and untreatable condition.

READ MORE: Dogs, Puggle, Living With Pets, The Human - Animal Bond, Health Issues, The Things We Do For Love

READ MORE: Dogs, Puggle, Living With Pets, The Human - Animal Bond, Health Issues, The Things We Do For Love