The Unexpected Pets We Get (and Sometimes Inherit) for Love 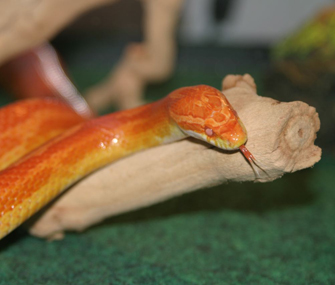 Courtesy of Kevin Leonard
There are many things we do for our loved ones. Rachel Leonard never thought she'd adjust to having a reptile in the house even though her husband wanted one. But Lil the corn snake has charmed her.

For graduation, my college boyfriend gave me a Siamese kitten to symbolize the longevity of our burgeoning relationship. (The breed tends to live to a ripe old age.)

As it turned out, our coupledom lasted only a few months past commencement, but the cat, Mina, remains my constant companion to this day.

Despite her slightly eccentric attachment to me, gravelly meow and a habit of vomiting from great heights (like atop bookshelves and TVs), we got along without much trouble — until my future husband, Andrew, came along.

From the get-go, their relationship was fraught. She found him irritating, and the feeling was mutual.

By the time he and I moved in together a couple of years later, I assumed all would go smoothly. And it did until our third evening as a “blended family” in the new apartment: That night, when Andrew came into the bedroom after brushing his teeth, I was already dozing in the pitch dark. I barely heard him pull back the covers and slip between our nice new sheets. But I definitely heard him scream.

Mina had vomited on Andrew’s side of the bed and then covered it up under the covers, so he unknowingly slid into a pile of wet puke. To this day, he insists that “Crazy Eyes” Mina did it on purpose to demonstrate her displeasure at his presence. I’m not sure that even the most vindictive cat has that much control over her gag reflexes. Luckily, Andrew and Mina have since made their peace with each other. Mostly. 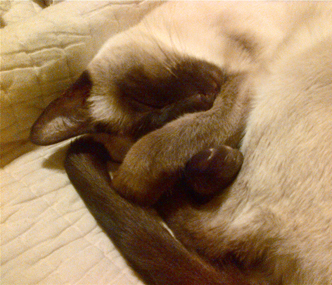 Nora Zelevansky for Vetstreet
The author's Siamese cat Mina, who is contentedly curled up here, was not always so happy with Nora Zelevansky's husband.

My husband is not the first person to inherit a “curious pet,” thanks to a new relationship. When we fall in love with someone, we accept that person’s good and bad baggage — however subjectively that gets defined.

A Tale of Two Tortoises

For Stacy Martin, falling in love meant making room for two other individuals in her life: a duo of turtles named Blanche and Lamont. Her future husband, Brian Martin, already owned the pair of African Leopard Tortoises when she met him.

Back in the day, when she was his assistant, it was Stacy's job to feed them at his house whenever he was out of town — a chore she did not relish. “My husband is a big animal lover, but he’s especially partial to reptiles,” she says. “They drive me crazy because they don’t do anything. Plus, they can live to be about 80 years old, and they're currently only 17.”

The turtles, Blanche and Lamont now live in a heated, outdoor brick house, which was custom built to match the family's main home. Stacy interacts with them as infrequently as possible, partly because of a scary incident that occurred when Brian was out of town.

“One of the turtles got caught in some yard netting, and when I tried to free him, he got scared and pulled the snag inside his shell,” she recalls. “I was terrified that it was going to cut off his circulation. Ultimately, he came out of the shell, and I very gently cut the netting. But I was freaked out by the entire experience.”

Stacy does admit that she enjoys watching her daughter and husband hang out with the tortoises: "My daughter loves the turtles, and she plays with them every morning because her swing set is close to their heated house. I have to admit that there's something cute about a toddler playing with a turtle."