Home ›
Our Pet Experts ›
Mikkel Becker ›
Why Does My Dog Pick Up Bad Behavior From Other Dogs?

Why Does My Dog Pick Up Bad Behavior From Other Dogs? 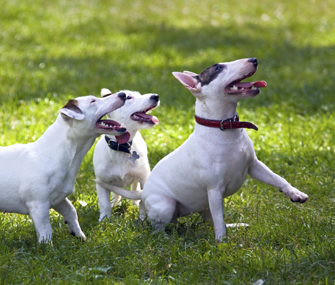 Q. Whenever my dog gets with his canine friends, they all pick up each other's bad behaviors — but never the good behaviors. Why does this happen, and how do I make it stop?

A. We've all seen it happen: An individual dog's barking starts an eruption of barking from any and all surrounding dogs. Unfortunately, the type of socially ignited behaviors that dogs are most likely to copy when they're together are often the ones we as pet owners try to teach our dogs not to do, which is why we see them as bad behaviors.

Dogs are not likely to mimic a behavior another dog has been trained to do, such as rolling over or shaking hands, but instinctive behaviors like barking and digging can more easily be transferred from one dog to another. For instance, though chasing and biting a running vacuum — essentially a predatory behavior — may not be a common behavior, if one dog in the household starts doing this, the other dogs in the house may adopt this behavior as well. Chewing is another less common behavior that can be transferred from dog to dog. Recently, a pet parent told me her first dog’s habit of chewing on the carpet was quickly taken up by her newly adopted dog.

For this reason, I recommend that owners with a dog already displaying problem behavior, particularly aggressive displays toward other dogs or people, deal with that behavior before they plan any outings with other dogs, or before they consider bringing a second dog into the family.

How to Deal With Problem Behavior

I’ve been working with a young adult cattle dog who barks and growls reactively on leash. The family had recently purchased a cattle dog puppy; the younger dog very quickly picked up on the tenseness and reactivity displayed by the older dog and also began to growl and lunge on leash. On our first consult, I immediately recommended that the owners walk the dogs separately to prevent the puppy from learning any more unacceptable behaviors from the adult dog. Once the older dog was removed from the walks, the puppy’s reaction to people immediately softened.