Home ›
Our Pet Experts ›
Denise Maher ›
Why Does My Neutered Dog... Still Try to Hump Things?

Why Does My Neutered Dog... Still Try to Hump Things? 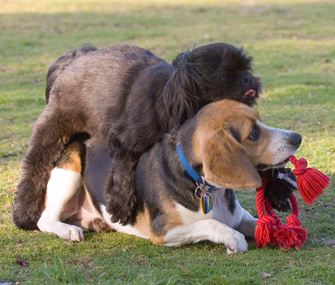 You'd think that once a pet has been neutered, his desire levels would decrease, right?

But according to board-certified veterinary behaviorist Dr. Karen Sueda, DVM, of the VCA West Los Angeles Animal Hospital, although neutering helps to decrease the amount of testosterone circulating in a dog's bloodstream, some of the sex hormone can remain in the animal's system. As a result, certain dogs will still exhibit mounting behavior, albeit less frequently.

Mounting or humping can be a hormonal-driven behavior, but it can also happen in a nonsexual situation. In this case, it’s known as a displacement behavior — an act that's exhibited out of context.

How Stress Plays a Role in Displacement Humping

Mounting an owner’s leg is not, as some believe, an attempt to dominate. Instead, a dog may hump his owner or an object, says Dr. Sueda, if he's excited and upset at the same time.

Case in point: A dog gets excited when he hears that his owner is home — so excited, in fact, that he knocks over the garbage. When the owner scolds him for making a mess, the dog may feel two emotions simultaneously: Excitement to see his owner, and anxiety from the negative feedback that he receives from the owner. As a result, the dog may try to hump something because he’s feeling conflicted.

Another example of displaced mounting is when a dog humps something in an attempt to simply get your attention. At one point, he may have gotten some laughs after mounting a stuffed animal, so he's since learned to do this as a way to capture your interest.

To discourage the behavior in these types of situations, says Dr. Sueda, try to remove yourself from the scene or ignore the action. But keep in mind that verbal reprimands will only add to your pet's stress levels, likely exacerbating the behavior.

When Humping Could Be a Sign of a Medical Problem

In some cases, especially if it’s a new behavior, mounting may be a symptom of a medical issue, such as a urinary tract infection.

If your dog hasn’t really mounted before, and the behavior is suddenly occurring often, talk to your veterinarian. It could be a sign of an infection or a hormonal disease that mimics an increase in testosterone. It may be necessary to investigate the health of a dog who is suddenly being mounted too.

"Remember," says Dr. Sueda, "mounting bothers owners more than dogs. People place human emotion on the act, assuming that it is a sexual or abnormal behavior, but dogs don’t see — or experience — it that way."