Home ›
Our Pet Experts ›
Dr. Jessica Vogelsang ›
Why Doesn't My Dog... Answer to His Name?

Why Doesn't My Dog... Answer to His Name? 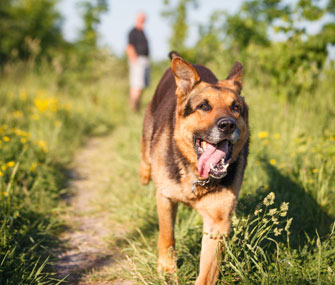 Thinkstock
Dogs seem to forget their names at the most inconvenient times.

At best, having a dog who doesn’t respond to his name is kind of embarrassing, and at worst, it can put your dog (or others) in danger.

Why is it that some dogs obediently come charging to your heels while others seem to forget their names at the most inconvenient of times, even after their owners have worked with them on the command? What can their owners do about it?

To answer that question, it’s important to know the specifics of why the dog isn’t responding, so owners can come up with the correct solution. Consider, for example, the fictional cases of George and Gracie.

George is a bouncy, happy, 11-month-old German Shepherd with irrepressible stores of energy. Though his owners took him to puppy class several months prior, they stopped their daily training sessions at home when the class ended. He seems to know his name when it’s dinnertime, but out in public with other things to capture his attention? Forget it.

Mistake 1: Like many owners, George’s family set out with the best of intentions but didn’t follow through with their training as far as they needed to. Just as some dogs respond to training more quickly than others, we also expect some variation in terms of how much practice a dog needs before he “gets it,” whether that’s house training, shaking hands or learning to come when called. Remember, consistency and forward progress matter more than speed of result, and that means owners should continue working on commands with their dogs even after they've done it correctly a time or two. It also helps to work on commands in a variety of environments, including those that might present distractions, such as a public park.

Mistake 2: Speaking of consistency, George's family is making a second mistake. They don't always use the same command when they want him to come. Sometimes it’s “Get over here!” or “Come on!” or just “George!” Confused, George isn’t quite sure what his owners are asking of him. It’s easy to assume our dogs know what we want of them, but we all know what people say about assuming things, right? Specific behaviors need specific commands.

Mistake 3: In addition to lack of consistency, George’s family sometimes forgets to use positive reinforcement. If George takes too long to get to them when the owners call his name, they sometimes scold him for the delay. This makes him even less likely to come to them in the future— from the dog’s perspective, there’s no good incentive for it.

After speaking with a trainer, George’s family went back to the basics: resuming short daily training sessions using the same command every time—“George, come!”—followed with a positive reinforcement like praise and treats. Once he was reliably responding at home, his owners continued to practice the training in high-distraction environments like the dog park. With consistency, it didn't take long for George to be back on track and responding to his owners every time he was called.

Gracie is a 13-year-old Miniature Poodle with a sweet and intelligent temperament, but her owners have noticed she seems to be getting crankier in her old age. Although she used to respond to her name without fail, she is starting to ignore her owners when they call her. One morning, when they finally located her, Gracie growled at the mother when she picked her up—a behavior very unlike her.

When Gracie went to the vet for a checkup, the veterinarian found several medical issues during the examination that could be causing Gracie to not come when called.

Health Issue 1:Her hearing was impaired, as evidenced by a decreased response to sound stimuli during the examination. It is possible she simply did not hear her owners calling her.

Health Issue 2:She was painful in her rear limbs, a condition later diagnosed as osteoarthritis. In dogs, pain often manifests as a reluctance to or a change in the way they interact with their owners.

Health Issue 3:While discussing Gracie’s history, the owners told the veterinarian that Gracie had also been pacing at night and occasionally seeming lost or confused. These are possible signs of canine cognitive dysfunction syndrome, an age-related deterioration in cognitive functions, such as memory and learning. Gracie may have not realized it was her name being called.

With appropriate treatment for Gracie’s medical conditions and some accommodations in the house to help her feel safe and comfortable, Gracie became less anxious, less painful and more like her old self.

While George and Gracie are fictional pets, they illustrate the two main categories of reasons a dog may not come when called: behavioral and medical. It isn’t always clear cut; the example of an older dog with arthritis demonstrates a medical problem that leads to a secondary perceived behavioral problem.

What to Do If Your Dog Isn't Responding to His Name

A good, positive reinforcement-based trainer is an excellent resource when you're working with a dog on good recall behavior. But it’s also important to note that any dog who who has a sudden change or regression in behavior should be evaluated by a veterinarian who can help you decide if there is an underlying medical condition before referring to training.

Regardless of the cause, it’s important to remember a dog who is not responding to his name isn’t being willfully disobedient. Dogs are faithful companions with a desire to please; sometimes we just need to do a little detective work to sort out the lines of communication so they understand what it is we want from them.