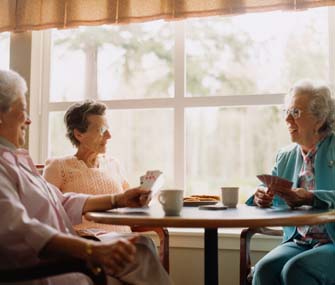 In 2007, David M. Dosa, M.D., M.P.H., a geriatrician at Rhode Island Hospital, wrote an essay, “A Day in the Life of Oscar the Cat,” about a special 2-year-old feline living at the Steere House Nursing and Rehabilitation Center in Providence, R.I.

In many ways, Oscar sounds like the prototypical cat, who wanders the halls, snuggles when he's feeling affectionate and naps regularly.

But one additional quality makes this animal different than others: He has an uncanny knack for sensing when patients are about to pass away, jumping onto their hospital beds and cuddling with them as they take their last breaths. Oscar was even awarded a plaque for his invaluable “hospice” work.

Why Pets Are So Important

While Oscar provides daily companionship, as well as astonishing end-of-life comfort at his Rhode Island hospital, most pets who live or visit independent or assisted senior living facilities also play important roles in their communities.

Interacting with animals, explains Alan M. Beck, Sc.D., the director for the Center for the Human-Animal Bond atPurdue University School of Veterinary Medicine, offers a wide range of advantages for people of all ages. Beck notes that these benefits include "increased focus, humor, exercise and thinking out loud because you can talk to animals without people thinking you’re crazy.”

Beck’s background reads a bit like a history on the subject: After several stints at places like John Hopkins Bloomberg School of Public Health — he studied the ecology of stray dogs in Baltimore with an NIH grant while there — and the New York Health Department to run their animal program, Beck absconded to the University of Pennsylvania’s veterinary school, which had just received a first-ever grant to study human-animal interactions at the time.

“The idea of actually studying what happens between animals and people was a new idea,” he explains. “At least half of the veterinary schools in North America now have programs, centers or units that look at what’s going on with humans and animals together." Today, even the AARP recommends dog ownership as a primary way to stay healthy if you're an older individual.