Why Some Vets Shouldn’t Treat Their Own Pets 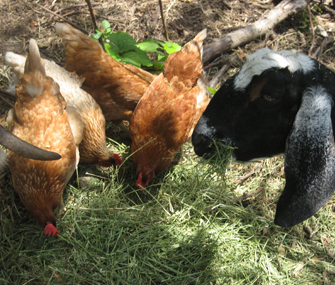 Tulip scavenges for seed with her chicken brethren.

Even before my most recent animal tragedy occurred, it was absurdly obvious to me that certain veterinarians just aren’t good at taking care of their own pets in a crisis. I’ve had cause to confess this personal weakness plenty of times. Some of us are simply too emotionally invested to think in a straight line.

I certainly wasn’t driving in a straight line during one such critical episode recently. A 200-pound goat was bellowing bloody murder in the back of my SUV, while I was busy channeling my inner Mario Andretti (something I had no business doing, given my state of mind). Then again, I picture my brain as a quivering, gelatinous mass when life-and-death scenarios hit close to home.

After all, when our own pets are in dire straits, it no longer matters that we pride ourselves on being the people most likely to think logically in emergencies. Everything we know — all that expensive education, all those years of experience — has a way of going out the window when one of our own is in the weeds.

That’s how it went with Tulip over Veteran’s Day weekend. The typically hearty eater (the Labrador Retriever of the goat world) had turned up her nose at her food on Friday morning. No big deal, I thought. I’d seen her do that before — once when she’d gotten into the chicken’s feed and another time when a neighbor had cleared out his yard and offered Miss Piggy a huge helping of juicy palm fronds.

But this time was different. When I came home to check on her at lunchtime, she was inside her shed, a place she frequents only when it storms or she’s giving birth. A full physical exam was in order, which is how I identified the bulge on the left side of her abdomen.

According to all of my goat medicine textbooks, this was not a good sign. In fact, I didn’t have to consult the books to recall some simple basics: The left side is where the rumen, or paunch, lives. And when the largest of a ruminant’s four stomach chambers is bulging, there’s either gas in there (gassy bloat) or something worse, like a bulky mass of foam (foamy bloat) or a less common hunk of solid stuff (rumen impaction).

In Tulip’s case, everything pointed to the latter. Why else would it feel so hard? Still, I was unconvinced. It made no sense to me. What could she possibly have eaten to produce such a firm rumen? It must be gassy bloat that just feels hard because it’s under so much tension, I reasoned.

After I’d recruited some extra hands, I inserted a stomach tube and then breathed a big sigh of relief as the air around us grew rank with the acrid stench of goaty gas.

I checked in on her all night, putting her feet up on her stanchion and massaging her belly to help stimulate belching and get things moving in the backward direction, too. Her stomach felt much less firm, but it still had a worrisome hard spot. I told myself that I’d stop by the feed store first thing in the a.m. to get an electrolyte powder. After that, I’d tube her some milk of magnesia to settle things down.

Unfortunately, things didn’t go as planned. Hence how I ended up re-enacting a Formula One race in an old-model Lexus SUV — a distressed goat screaming the whole way.

In the end, she arrested as I was trying to confirm the presence of an impaction using an ultrasound machine at the specialty practice across the street (Miami Veterinary Specialists is so nice to me). Tubing wasn’t working. IV fluids were a nice addition, but they weren’t much help when the fundamental issue was a blockage that needed to be surgically removed immediately.

Sand, I’d finally realized, was the culprit. That’s why it had felt so strange. It all started to make sense once I calmed down long enough to play out the last three months in my head.

I’d been planning to get Tulip pregnant soon — you need babies to have milk and cheese — but I’d been procrastinating because of her weight. It’s not a good idea to get an overweight goat pregnant, since fatties have a greater tendency to turn out triplets (not a good thing). So I’d been cutting down on her helpings.

That’s probably why I’d been catching her nibbling on the ground in search of stray grain intended for my chickens — hence a belly full of sand, which we’ve got lots of here. I just never thought that she could ingest so much. Nor did I know that she could go from off her feed to dead in less than 24 hours. After all, I’d done everything that I’d been trained to do. Everything but think linearly, ignore my emotions and biases and — above all — act quickly.

In retrospect, it all seems so obvious, so preventable. That is, if I’d stopped to observe how much sand she was ingesting. And so fixable — if only I’d gone straight to surgery once it was clear that her rumen’s hard bulge wasn’t budging.

With the benefit of hindsight and clarity of thought comes all the self-recrimination you’d expect from someone who’s just lost a patient. But it’s worse this time because I failed my own. It's worse because I can see multiple ways in which I failed her. My inability to think and act like a veterinarian in a personal emergency means that it will probably happen again.