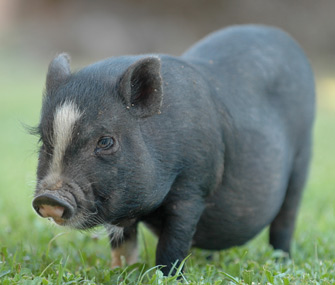 Thinkstock
This potbellied piglet might be little, but he could grow up to be as much as 200 pounds.

Gone are the days when the word “pig” would conjure up a vision of a huge sloppy sow on a farm, rolling in mud. Today, pigs are commonly kept as pets in people’s homes, even in urban areas. Pet pigs and farm pigs are the same species, so, theoretically, they can mate. However, their breeds — and therefore their sizes, temperaments and basic needs — can vary greatly.

Pet pigs are generally divided into different types depending on size. The term "mini pig" is a general description that includes many different sizes of pet pigs — but keep in mind, to some people, the term “mini pig” can still mean a pig that is quite large by household pet standards. Depending on whom you ask, there are a variety of names for different sizes of pigs, but in general, mini pigs commonly kept as pets fall into one of the following groups:

Potbellied pigs (also known as Vietnamese potbelly pigs, Chinese potbellied pigs and potbelly pigs) stand 16 to 26 inches tall at the shoulders and weigh between 125 and 200 pounds. While still quite large, these are much smaller than farm pigs, which can weigh 800 pounds or more.

Miniature potbellied pigs stand 15 to 16 inches tall at the shoulders and may weigh up to 100 pounds.

Teacup potbellied pigs are 14.5 inches tall at the shoulders and are really just smaller potbelly pigs, generally weighing 35 to 45 pounds. Be aware that the “teacup” designation refers to how big they are at birth, not at adulthood.

Toy potbellied pigs are 14 inches tall and weigh 35 to 45 pounds.

Mini Julianas (also called miniature painted pigs or spotted Julianas) are 8 to 12.5 inches tall and weigh 15 to 28 pounds. Julianas are a separate breed from potbellies. They are more delicately structured than the potbelly and have a long nose and a spotted coat.

While these pet pigs are commonly distinguished by size, all pigs, including farm pigs, are very small at birth (generally between 2 and 4 pounds). That’s why it’s essential, if you’re getting a pet pig, to find out how big its full-grown parents are (and perhaps even its grandparents), as some pigs grow very slowly, even well into adulthood. Genetics is the only way to determine how big a pig will get, and unfortunately, many pet owners expecting to keep the adorable little piglets they start out with end up with huge hogs that are more than what they bargained for. If you really want to be certain that your mini pig is going to stay “mini,” consider adopting a fully grown adult pig to take the guesswork out of your decision. 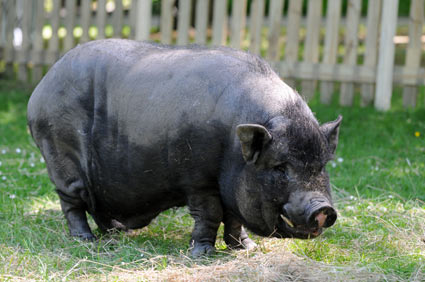 Alamy
Before bringing home a Vietnamese potbellied pig, make sure it's legal to own a pig in your area and that you have enough space to house one.

Before You Get a Pig

Most people considering a pet pig fall in love with the notion of owning a cuddly little piglet. What they don’t know is that even little piglets have several important requirements and may not be as easy to care for as they imagine.

Legality: Before you even think of getting a pet pig, you should check with your local government to see if pigs are legal in your area. Many cities, counties and municipalities do not allow pigs within their boundaries. Generally, state and federal governments consider potbellied pigs livestock, and even if they are allowed, owners must have health certificates for these animals, signed by accredited veterinarians, stating that they are healthy and properly vaccinated.