Home ›
Our Pet Experts ›
Dr. Patty Khuly ›
How Much Exercise Is Too Much for a Puppy?

How Much Exercise Is Too Much for a Puppy? 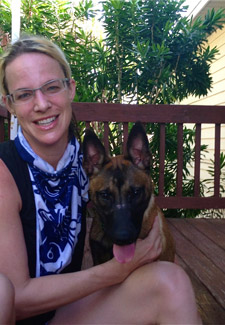 Photo courtesy of Dr. Patty Khuly
Violet and Dr. Khuly after a run.

Few Studies on the Effects of Exercise

Now, I know that people mean well when they deliver safety-based recommendations. But any way you slice it, that’s a lot of "no." More so than I tend to come across in my research on most any puppy issue. And all, it seems, are based on only two small studies:

Though they’re far from offering any sort of definitive answer on the issue of safe exercise for pediatric dogs, these studies appear to have influenced a generation of veterinarians, breeders and pet owners with their negativity. How else to explain the preponderance of fear-based emails on the issue? (I’ve received a ream of these over the years.)


It Depends on the Individual Puppy

As you might have guessed by now, as a veterinarian and a new puppy owner, I have a problem with this scenario.

For starters, I can’t seem to reconcile these recommendations with the reality of owning an active puppy. I mean, I’d never sleep if she didn’t spend half the day running the fence line with the neighbor’s dog, exhaust herself in puppy kindergarten and then wind down by playing with the pack inside at night. She’d be impossible to handle, bundle of raw energy that she is.

For more insight, I contacted Dr. Marc Wosar, MSpVM, DACVS, an orthopedic specialist and faculty member of AOVet, an international organization that promotes research and education on musculoskeletal disorders in animals.

"Unfortunately, there are no hard and fast rules in these cases," Dr. Wosar says. "It's actually a big issue for our equine colleagues who have to deal with these issues all the time when it comes to training racehorses and other equine athletes."

"On the one hand, we know wolf pups run with their packs for miles. On the other, we know that the risks for a sedentary puppy with a weekend-warrior exercise pattern are worse than for a puppy that gets continuous, self-regulated exercise," Dr. Wosar says.


"Ultimately, we have to balance what's best for a pup's behavior with what's best for her growing and developing anatomy and physiology. And since we're not sure what that is, we have to make approximate recommendations based on an individual dog's breed, energy level, behavioral needs and risk of developmental diseases that may be affected by exercise," he adds. "That's why new pup owners should always consult with their veterinarian on this issue."

To my way of seeing things, it all comes down to common sense. In the absence of any hard and fast rules, caution makes sense, but attention to the positives of exercise — even what some may consider a great deal of it — deserves more than its current role as mere afterthought in this debate.

After all, given the sad state of pet obesity in this country and the legions of pets laboring under its weight, I can’t help but think the question should be less about the theoretical “How much is too much?” and more about the rock-solid knowledge that too little exercise over a lifetime can kill.