Strategies for Training a Deaf or Blind Dog 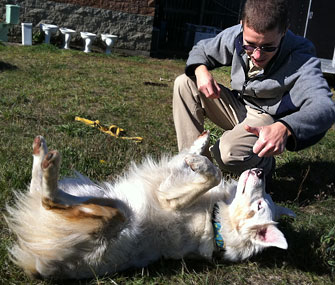 As a dog trainer, I am constantly challenged to expand my repertoire of training techniques. A one-size-fits-all approach doesn't work in training because each dog is one of a kind. And although all the dogs I’ve worked with are special, one pup who stands out in my mind is Eldon, a partially blind and completely deaf Australian Shepherd who came in for obedience training.

Eldon was born deaf and partially blind, possibly from a disorder found in Aussies when two merle-colored parents are bred and the offspring inherit two copies of the dominant merle gene. This causes excessive amounts of white in their coloring and is commonly associated with hearing and vision impairment. Unfortunately, many puppies born with the double merle gene are euthanized, yet dogs born deaf or blind can live fulfilling lives. Eldon was lucky enough to be rescued by a loving family who had prior experience with deaf and blind pets.

A Bridge of Communication

Although obedience training is essential for any canine, it's imperative for deaf and blind dogs because it builds a bridge of communication between the pets and their humans.

A critical component of effective training is the marker signal, or immediate signal, which lets the dog know when he does something correctly. The most common markers are the human voice and the clicker. Since Eldon couldn't hear these markers, we had to come up with a signal that he could easily perceive and that we could deliver immediately. The family wanted to train Eldon without a vibrating collar, which is often used for dogs with hearing problems. The collar gives feedback through a light physical vibration on the dog's neck when he performs a behavior correctly, and you follow it with a reward. Eldon had eyesight in one of his eyes and could easily see hand signals during our up-close obedience training sessions. We came up with a hand signal that could be delivered as a marker signal, even with leash in hand, by using a humbs-up signal, which was paired with an immediate reward.

One of our biggest challenges was getting Eldon’s visual attention back on us when he was sniffing at the end of the leash to scout out the environment. We chose a physical signal — a gentle pull on the leash down and back toward us. As soon as he turned in our direction, we gave him a thumbs-up and reward. After only a couple of tries, Eldon was changing direction to face us as soon as he felt the downward pull on the leash and waiting eagerly for the next direction we would give.

To add commands for each of the behaviors asked, such as the sit or the down, we used hand signals rather than voice. Once a behavior was taught, we added a new hand signal just before the behavior was performed so that it became associated as the cue to prompt the behavior. This worked in up-close training in the basics. But for the "come when called" command, done at a distance, we used a full-arm signal while bending down, which Eldon's limited eyesight could perceive even from afar.

Eldon shone as a training superstar, not only in learning the basics like stay, walking on a loose leash and waiting at the door, but also in learning tricks like roll over, play dead and shake.

Everyone Gets a Reward

Eldon couldn't hear us, but neither his handler nor I could resist cheering out loud as we celebrated each success. When our lessons were up and it was time to send Eldon off on his journey to live as a beloved family pet, I said goodbye with a gigantic smile on my face that didn’t fade for hours. Like many other special-needs pets, Eldon didn’t waste time feeling depressed over the things he lacked. Instead, he had a bounce in his step and a wag in his tail over the ways he could still enjoy the world around him. Despite a limited ability to communicate, we were united through the language of humane training. Mark Twain said it best when he said, “Kindness is the language which the deaf can hear and the blind can see.”