Sept. 12, 2016: We've scoured the Web to find the best and most compelling animal stories, videos and photos. And it's all right here. 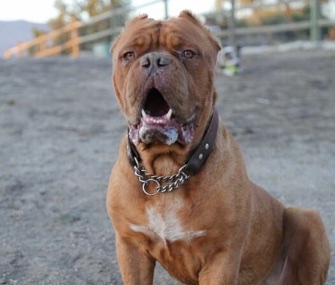 American Humane
Hooch, who overcame abuse and injuries to become a therapy dog, is named the American Hero Dog of 2016.

A 3-year-old French Mastiff who was rescued after being terribly abused and injured was honored this weekend as 2016’s American Hero Dog for his work with abused and special needs children. Hooch was saved from a California shelter by Marley’s Mutts Dog Rescue. He was starving, dehydrated and wouldn’t eat. When he was examined and X-rayed, a vet found that his tongue had been removed, most likely to get him ready to be a bait dog in a dog fight. That left him unable to eat on his own, but luckily his rescuers found that he took well to being hand fed. Hooch showed bravery and forgiveness in his willingness to trust people again, and now works as a therapy dog, bringing his gentle and patient ways to abused, autistic and special needs kids. In online voting, Hooch beat 173 other dogs who were nominated for the award. He was presented with the award from American Humane in a star-studded ceremony that will air on the Hallmark Channel on Oct. 28 at 8 p.m. ET/PT and 7 p.m. Central Time.

A unique conservation effort in a newly declared national park in Afghanistan has helped bring the elusive and endangered snow leopard back from the brink. Scientists with the Wildlife Conservation Society say there are now up to 140 of the cats in the 4,200-square mile Wakhan National Park. Experts believe the number of snow leopards around the globe could be much higher than the estimated 7,500. — Read it at Phys.org


Bowie the Koala Released Back Into Wild

A beautiful koala with two different colored eyes drew international attention when she was rescued after being hit by a car in Queensland, Australia, in July. She was taken to the Australia Zoo Wildlife Hospital and named Bowie after the singer David Bowie, who died earlier this year and also had two different color eyes. The striking koala was treated for two months and released back in the wild last week. The zoo said Bowie was timid at first but quickly climbed a tree to examine her new surroundings. — See photos at Buzzfeed 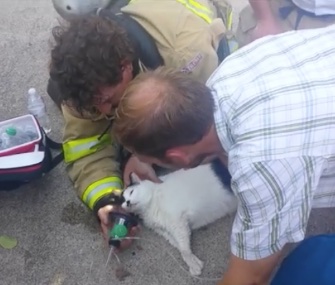 Firefighters from Ames, Iowa, worked for more than 30 minutes to revive a cat who was found in thick black smoke in the basement of a burning house. The firefighters had to run back into the blaze twice to find Cleo. She appeared lifeless as her rescuers rushed to used a special oxygen mask for pets to help her breathe. "As time went on, (Cleo) started to slowly come to, started meowing, started to breathe on its own (and) started to move around on its own,” Ames Fire Department Lt. Jordan Damhof said. “So all positive indications that things were working well." Cleo was taken to the Iowa State University College of Veterinary Medicine, where veterinarians were hopeful that she’d be well enough to go home after a few days. — Watch it at California’s ABC 7

After a hard day’s work, who isn’t ready for a pick-me-up treat from Starbucks? A video of a Twinsburg, Ohio, police K9 indulging in a “puppuccino” in the back of his handler’s patrol car in the coffee shop’s drive through line has gone viral. The hard-working dog clearly enjoyed the small cup of whipped cream, which has become a favorite of many dogs this summer. This pooch cleaned his cup in less than 30 seconds. — Watch it at Houston’s ABC 13