Home ›
Our Pet Experts ›
Linda Lombardi ›
What Do Zoo Animals Do When It Gets Cold?

What Do Zoo Animals Do When It Gets Cold? 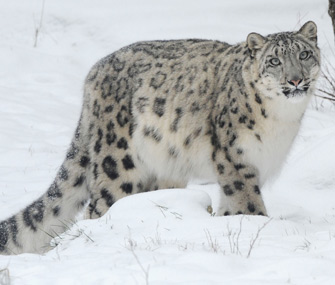 Chicago Zoological Society
Sarani the snow leopard moved to the Brookfield Zoo from Idaho just before the winter of 2011.

So most zoo animals don't hibernate, but there are some exceptions. Brookfield does have a program to have their brown bears hibernate. "We have a hibernation den that's on exhibit, and we allow them to bulk up at this time of year and really put on the pounds," he says. But they don't go into deep hibernation like in the wild. "We have cold days when our brown bears will come into the den, and they'll sleep for a week at a time, but it's not real hibernation."

In some cases, cold-climate animals can hibernate in their exhibit and don't need indoor areas. Zeigler recently visited another zoo whose prairie dogs hibernate for the winter. They have a similar diet program to bulk up, and the exhibit is designed so they can burrow naturally. "If you allow them to dig down deep enough that they go down below the permafrost line, the dens stay at 55 degrees," he says. "That allows them to cool down and they go to sleep."

But if the exhibit doesn't allow that — say it has a concrete bottom — they need to come indoors for the winter.

There are also reptiles and amphibians that will only breed if they go through a cold period, a process called brumation. But zoos only need to initiate that process if they're trying to get the animals to reproduce. "They'll stay active as long as you keep the temperature up, but they may not cycle into a breeding situation without that," Zeigler says.

It's the fashion nowadays for us humans to eat seasonally, and Brookfield Zoo is unusual in that it wants its animals do the same — but not because it's a fad. The zoo's nutrition department is studying seasonal changes in natural diets in the wild. Perhaps surprisingly, these changes even occur in places without cold winters.

Think about a tropical primate, Zeigler says. "Not every tree in the forest fruits at the same time," he points out. "It's different depending on the season, and each fruit has a different nutritional value and sugar content and so on."

Or consider antelopes, which are usually fed the same pellet-and-hay diet year round. "Even in Africa they go through a drought season — food becomes lower in quality and has less nutritional value," he says. "Then spring rains come, everything comes up and it's lush, and that triggers the female to go into estrous."

Seasonal changes in diet even happen with animals that don't eat plants. Brookfield has been involved in studying dolphins in the wild for 44 years and is now applying what its researchers have learned about their diets to the dolphins in their dolphinarium.

"Coming from Florida, I know that when I go fishing there, there are different fish that I fish for throughout the seasons, so that's telling me that dolphins must be eating different fish too. We think that helps keep them conditioned and helps them go through reproductive cycles," he says. "We're trying to do this with everything — we try to provide variety, and now we're looking at the seasonal changes we can provide."