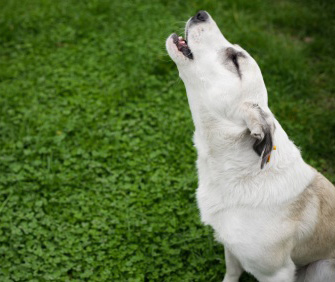 A howl is a dog’s way of having his say in front of the widest possible audience over a sustained period of time. Think of it this way: A bark is like placing a local call, while a howl is more of a long distance dial.

Dogs’ wild cousins (wolves come to mind) howl for a very practical reason: Since they often have to roam far away from each other in search of their next meal, howling helps them keep in touch with pack members. In fact, their acoustic sensitivity is so refined that wolves are capable of distinguishing one pack member's howl from the next.

There’s also evidence to suggest that wolves use the howl as both a bonding ritual anda means to enforce rank. One pack leader will initiate the chorus, which is taken up by subsequent members, thus reinforcing the social bond they share.

You’re probably saying to yourself, "I understand why wild wolves need to howl, but do domesticated dogs really have a reason to do it?"

Perhaps it’s just a vestigial behavior left over from their wild ancestry, but plenty of canine behaviorists think it's both instinctively necessary and rewarding. In domesticated company, the point of the howl is simple: It’s all about announcing a dog's presence and basking in the satisfying connection to others when they reply.