Feb. 1, 2016: We've scoured the Web to find the best and most compelling animal stories, videos and photos. And it's all right here. 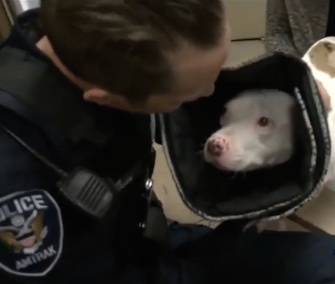 WBAL
"Miracle" Molly smothered her hero, Amtrak Police Officer Kevin McMullen, with kisses when he visited her on Friday.

“Miracle” Molly Thanks Her Hero

A week after he helped save her life, Amtrak Police Officer Kevin McMullen visited “Miracle” Molly at a Baltimore shelter — and got a hero’s welcome. Earlier this month, McMullen got a call from a dispatcher saying engineers had spotted a dog in the train tunnel system. With only a mile marker to go on, the officer found the pup, who’d been hit by a train. He knew she needed help fast and quickly got her to the BARCS shelter. She had lost a hind leg and more than half her blood, but after surgery, she’s now recovering. "That's why everyone keeps calling her a miracle. All the signs point her to she shouldn't have made it,” said the shelter’s Bailey Deacon. Molly seemed quite grateful to the officer who came to her rescue. She clearly remembered him and smothered him with kisses when he visited her on Friday. So, will Molly have her happily ever after with McMullen? “While Officer McMullen has been granted first-in-line for Molly's adoption, he has other dogs and is committed to making sure it would be best for all,” BARCS posted on Facebook. “Molly has a lot more healing to do before we would begin introductions, so she will remain in foster for now — and you know, being a cele-pup-ty!” — Watch it at Baltimore’s WBAL

A newly proposed federal rule would improve standards for the handling, care and housing of captive marine mammals, with a focus on killer whales and dolphins. There’s a 2-month period where the USDA, which proposed the change to Animal Welfare Act regulations, will accept commentary, but the new standards are expected to go into effect. “It is an important animal welfare step, at a time when the nation is questioning more than ever if cetaceans should be put on display at all in captive environments at for-profit ventures,” said Wayne Pacelle, president and CEO of The Humane Society of the U.S. — Read it at Discovery News


Abandoned Baby Rhino Gets a Surrogate

An adorable rhino calf who was abandoned near Cape Town, Africa, has a new home at a private game reserve. He seems quite content with his new human caretaker, who’s taken on the role of his mom, giving him a daily mud bath and feeding him milk by the gallon with a huge bottle. In cute footage of the calf, he sweetly trots after his keeper — and climbs all over him to get his breakfast. — Watch it at NBC News 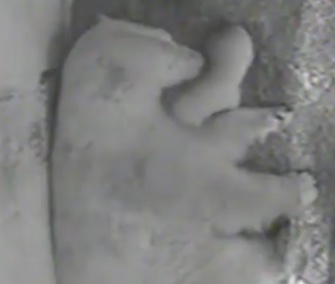 Toledo Zoo via Facebook
A newborn polar bear cub cuddles with mom Crystal in a sweet new video from the Toledo Zoo.

A little white bundle of joy was born at the Toledo Zoo recently to 16-year-old mom Crystal. Last week, the Ohio zoo released a video of the mom and baby snuggling sweetly in their secluded den. The animal care team is keeping track of the cub’s progress by video monitor, but will let the pair stay in their den and bond as they would in the wild. The video is a sneak peek of the cub who the public won’t be able to see in person until the spring. Because they haven’t disturbed the mom and baby bears, the zoo doesn’t yet know the cub’s gender. — Watch it at the Toledo Zoo via Facebook

Elephant seal season, or Ellie Season as it’s called by the Marine Mammal Center in California, has begun. On Friday, the center shared a cute photo of its first rescued pup of the season, named Januellie — a combination of January and Ellie. Because she’s still wearing her black coat, Januellie’s rescuers can tell she’s only a few weeks old. The baby was found separated too early from her mom, likely from storm-driven waves or fights between males on the beach, the center said on Facebook. They said Januellie would probably have starved if she hadn’t been taken in. She’ll be returned to the wild as soon as she’s ready. — See photo from the Marine Mammal Center via Facebook